skip to main | skip to sidebar

I took these pictures the other week. I happen to think they are perfectly adorable photos of the twins. 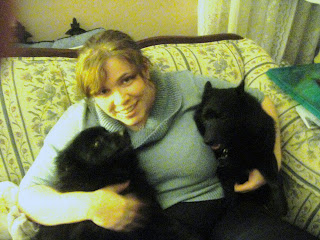 Not a happy song. 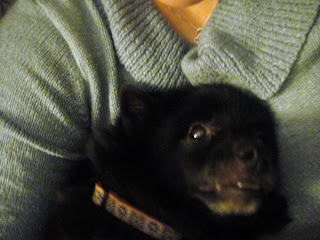 He is joy personified. 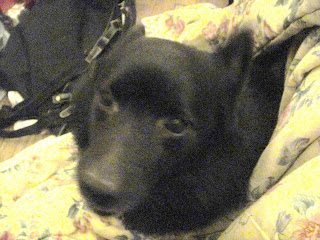 I didn't realize it had been so long since I posted last. Since then, I've acquired some stepsons, courtesy of my fiance. I would like to introduce Shocka and Caesar, who I call Beazer. Shocka is the black and white, Beazer is the brown and white. They are father and son.

They were helping me shovel snow. They thought it would help if they ate it. 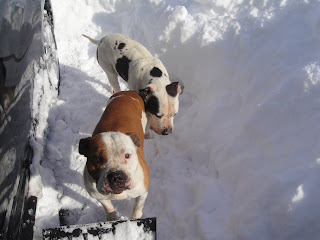 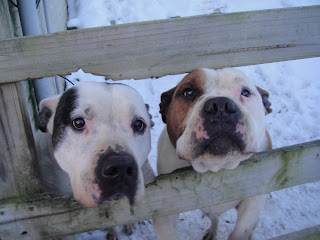 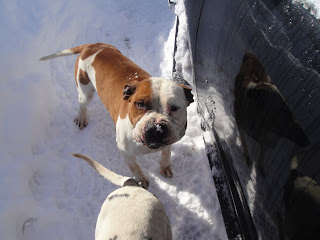 The joys of the elderly!


For some reason, and I don't know if he's scared of them, hates them, or just considers himself to be above sharing the bowl with them, but Gus the cat has decided he will no longer drink from the dogs' water bowl. The water is the same, it comes from the same faucet, he never had this issue before, but now it's a big problem, worth screaming about.

This morning I had to change his water out, and then had to put it in the bathtub because, being the dogs, the twins found the water bowl and started to drink from it, and he wasn't having that.
Posted by Rachel S-H at 7:00 AM 2 comments:

My brother brought his girlfriend's Jack Russell terrier mix over Saturday night. I guess cause they're moving in together, he wanted her to get used to the Mongrel Horde, since they'll be just up the street.

None of my dogs like her. Robbie hates her because she flirts with him, and he is out of the gene pool, and happy about it, plus she teases him (family reunion, she got him to run the whole way out his tie-out and he fell over and it hurt his pride) and tries to sit in my lap, and Robbie feels I am HIS mother, and she needs to stay out of my lap.

My brother's dog hates her because my brother is always bringing her in and he is Nikki's daddy. She can't understand why he leaves her and goes to play with the little one. Plus, she's busy and Nik's border collie brain is all about order, so it drives her crazy.

Chancey really doesn't seem to dislike her, but advises that, because her brother hates her, she has to stick with family.

Anyway, yesterday, Delilah (the JRT) was bouncing around, and Robbie was moping so I gave them each a cookie. I figured she would calm down, and he loves to eat and cookies make him feel better. He settles down to eat his cookie, because he knows, in this house, an uneaten cookie isn't left alone long, while she proceeds to bury her cookie under the couch cushions. It took that dog 10 minutes to get her cookie hidden, and I guess she realized someone was going to find it, because she got it out, then stood there, trying to figure out what to do.

And then Chancey started to bark. I don't know if it was at the mailman, the neighbors, a ghost or what, but she started to bark. When one member of the Mongrel Horde begins to bark, all members must start barking. Until the offender, earthly, ethereal, demented delusion, goes away or I start yelling. Delilah goes over by Chancey and starts to bark. You can't bark with a cookie in your mouth so she dropped it. And Chancey pounced.

She picked up the cookie and took it to the other side of the room. I guess she figured she would eat that cookie at a more convenient time (I don't give her cookies, because she has an underbite, so you never know if she can chew a hard cookie, but she was trying on this one.) And then that silly dog runs back over to where she was.

As I turn around and start the, "Goliedown. Quitthat. Whatiswrongwithyouthisisn'tevenyourhousedelilahwhyareyoubarking," tirade (because 3 small dogs barking in your ear is TORTURE), I see my brother's dog get off her chair, go to where Chance has deposited the cookie and eat it. Robbie managed to eat his cookie before the nonsense started, so he was good, but his sister and step-cousin, not so lucky.

It was the most hysterically funny group exercise I've ever seen them accomplish.
Posted by Rachel S-H at 6:07 AM No comments:

Hi, sorry it's been so long--interesting thing I learned today

I am so sorry, it's been 3 months since I've posted. It's not that I don't want to post, it's just time gets away from me so quickly.

Everyone is fine at my house. The twins are doing really really well. They've started a new habit of sitting very close and kissing each other. It's very puppy-like and simply adorable, not that my children are not naturally adorable.

I did find out something really cool this morning. Chancey's registered name is Chanson de Nuit. Night Song in French, because she is black. It just flowed so beautifully. When she was a puppy, she was named Cordelia and her sister was named Regan, their brother was Robin. The names are from Shakespeare. I always thought they were from the Tempest because of their grandfather, but Cordelia and Regan were the daughters in King Lear. Robin is not in that play, but he was originally shown under the name "Robin Goodfellow"--I googled him. Robin Goodfellow is another name for Puck. Per Wikipedia, Puck took the form of a black dog.

I love finding out little things like this. Really, Robin is the perfect name for a little black dog. I love it!
Posted by Rachel S-H at 6:22 AM No comments:

Merry Christmas to the forever petparents

This is gonna probably sound sappy, but this morning, Mom and I were talking, and Robbie-do was being his normal cheerleader self, happy and bouncy and playful. We got to talking and I asked her if she thought he was happy or if he ever wondered about his former homes. She said he is very happy, and that he probably doesn't think about his other owners. And then, it just hit me, I said, "I've always been his owner, it just took him a while to come to me."

So, for all the people who've opened up their homes to being forever petparents, this is from Robbie and I. I've never thought how it applies to our furbabies

[Chorus:]
Every long lost dream led me to where you are
Others who broke my heart they were like Northern stars
Pointing me on my way into your loving arms
This much I know is true
That God blessed the broken road
That led me straight to you

That God blessed the broken road
That led me straight to you.
Posted by Rachel S-H at 6:36 AM No comments:

And we have PLAY

This morning, the Schipperkes played together. Woo hoo! It's been two months since Robbie's come and they will normally just co-exist. Their chief goal has been to be close to me and usually that means, Chancey loses out. Except in bed because she won't put up with him getting all the attention. That is HER bed. She is queen of the Schipperkes. But I noticed that they actually slept touching each other on Sunday night, which I was pleased about. Chancey has seemed a little down since Robbie came and I was getting worried, but ever since she went bye-byes to Pennsylvania with Mom and I, she's much happier, I guess because she realized I still love her, she didn't get shoved aside for new guy, and that she would still get special treats. That said, she still isn't buddies with him.

So imagine my surprise when they played together today. Nothing major. I guess Robbie had energy from the first sprint outside, and he wanted to run with her. She looked at him for a few moments with her special, "What the Hell is wrong with you, freak" look. Then I guess she figured out what he wanted and they actually played a game we call, "Run Dog Run"--it's pretty self-explanatory, they just run with a crazed look in their eyes--for a couple minutes. It was refreshing, at least til Luke's dog, seeing two small black forms running through the livingroom, decided that it was just too much for her border collie brain--"Must herd, must keep order" to handle. Or else she wanted to play with them. Either way, Robin didn't want her there. So he growled and it was over.

Rachel S-H
I am a wife and mother to two amazing kids, trying to go through life with as much humor as the law will allow. I've been stitching since I was 13 years old, taught by my beloved older brother and am in constant struggle to win Best of Show at the fair. I also enjoy cooking, but I admit freely I am the semi-feral housewife. I read way too much and clean way too little. Follow me on Instagram to see more of my life as a stitcher and mayor of Crazyville at @rachel.spory.